During this pandemic, it is natural for parents to be concerned about their child’s immunity. A recent nationwide survey titled #ImmunityMatters, revealed that 96% of parents have concerns about their child’s health in the light of COVID-19. It is important to lay the building blocks for a good immune system in the first five years of a child’s life because this is the time of rapid physical and mental growth.(1)  Especially with this pandemic, we want the children to have good defenses.

To be immune means to be protected and so, the body system that helps fight off sickness is called the immune system. The immune system consists of a team of cells, proteins, tissues and organs that fight off illness, germs and other invaders. When a foreign substance enters the body, the immune system will kicks into gear and attacks.

However, children do not have fully developed immune systems until they are about 7-8 years old. Because the immune system helps the body fight against diseases and infections, children have an increased risk of developing conditions, such as fever, cough, flu, common cold, diarrhea, ear infections and allergies compared to adults.

How Many Colds Per Year Is Normal for Children?

Well, everyone gets sick sometimes. But your immune system helps you get well again.

Children start to get colds from around 6 months old when the immunity they receive from their mother fades and they have to build up their own immune system to defend themselves.

The average baby, toddler and child can get around 7 to 8 colds every year. By the time they reach school age that should reduce to around 5 to 6 times a year and when they become teenagers they reach the adult level of around 4 colds a year.

Besides colds, children get a lot of diarrhea-type illnesses (with and without vomiting) and tummy bugs, which they tend to get around 2 to 3 times a year.(2) Some children will be more susceptible to high fevers when they get a cold, or others might have a particularly sensitive tummy, and develop diarrhea symptoms easily.

Why Do Children Get Ill So Often?

7 to 8 colds a year seems awfully high? Why do children get ill so often?

The main reason children pick up infections and viruses so easily is because they are being exposed to new viruses all the time. Every person they meet, place they go and things they touch will expose them to new viruses. There are over 200 different recorded cold viruses alone, and they mutate all the time, so it’s tricky to avoid them!

However, as they are exposed to more viruses they will build up their immunity over time.

How Do You Gauge Whether Your Child’s Immune System Is Healthy?

A weak immune system can cause children to get sick faster, more frequent, for longer periods of time and harder to treat from usual childhood infections. While there is no way to measure immunity, there are certain signs you can look out for.

Respiratory infections in children such as common cold, flu, cough and runny nose usually occur due to an imbalance between exposure to infectious diseases (microbial load) and the ability of the immune system to ward off the infection. However, if a cold with a fever that lasts more than five days with difficulty breathing (beyond a stuffy nose) and lasts more than 10 days, then it probably means a weakened immune system.

Weakened immunity may even delay growth and development in children. When a child falls ill, he/she would not want to eat and might become underweight, and if it happens frequently, there is a disruption in growth. On the other hand, fewer sick days mean they can eat better, and are more vibrant and energetic.

Mild wounds take long to heal when the immunity of the child is low. The healthy immune system helps skin to heal and fight harmful bacteria or germs while reducing the risk of infection. However, a weak immune system hinders the skin’s normal functioning and doesn’t let it fight infections faster as it should.

The skin is the first barrier of the body to fight against germs. Its appearance can also reflect on how well the body’s immune system is working. The appearance of frequent skin rashes, eczema or dry skin is a sign of inflammation and may even indicate a weakened immune system in children if the rashes are recurring and causing lupus on the skin.

As a parent, what can you do to protect your child and minimize the risks of infections?

Nothing pains us more than seeing our little one fall prey to cough, cold and other infectious diseases. Even though colds and flu are a fact of life for kids, but there are smart steps you can take to help reduce their number of sick days.

Ensuring that kids develop a stronger immunity naturally is one way to go about it. So, let us look at some healthy habits you may adopt to support your child’s immunity.

1. Serve up a variety, balance and healthy platter

Berries, bell peppers and broccoli are brightly colored and rich in antioxidants. Oranges and citrus fruit high in Vitamin C boost immunity and act as a barrier against infections. Green leafy vegetables like spinach are iron-rich and aid the production of white blood cells and antibodies. Nuts, seeds, grains and beans contain vital omega fatty acids. Eggs are a great source of protein and can be added in the daily diet in various forms.(3) Foods with excess sugar and junk food should be limited to an occasional treat rather than a regular feature.

Sleep is a restorative process that plays a critical role in the proper functioning of the immune system. Most children need between 10 to 14 hours of sleep. Lack of proper sleep may lead to the weakening of immune system as well as increased susceptibility to infection. In fact, during the movement control order (MCO), it is found that children were sleeping later, which can make them more susceptible to illness.

To make sure your child sleeps enough, set regular bedtime routines so that you enforce the practice of going to sleep on time. Minimize distractions from sleep – remove toys or digital tablets from their reach at night.

Exercise plays a huge role in overall fitness. Exercise creates opportunity for movement, which in turn increases the immune system through higher white blood cells and oxygen flow that kills bacteria. Exercise also slows down stress hormones which reduces the chances of falling sick. The Malaysian Dietary Guidelines for Children recommends 30 minutes of exercise per day for kids 1 to 4 and 60 minutes for kids over 5.

While we do our best by helping to curb the widespread of Covid-19 by staying at home, parents might help to keep kids active indoors such as jump rope, hula hope, hallway soccer and dancing to music.

4. Give them a colostrum boost

Colostrum – the “first milk” produced from nursing moms is considered the gold standard in building a baby’s immunity. Studies have shown that babies who are breastfed for at least six months have a better developed immune system and are less prone to infections and allergies due to the protective, immune-boosting antibodies found in colostrum. (4) Older kids can benefit from this antibody-rich substance from grass-fed cows and goats.

5. Have them drink plenty of water

Children often forget to drink water, so make sure you keep track of their intake and make frequent reminders. Drinking enough water is important to keep hydrated on a regular basis, especially when it’s cold and flu season. Keep your immunity up by drinking plenty of water to stave off infection. Drinking enough water helps regulate blood circulation, supports the metabolism and facilitates the elimination of harmful toxin and other bacteria that may cause illness. The Malaysian Dietary Guideline recommends that children between 2 to 6 years should have four to six glasses of water every day while above 7 years should drink six to eight glasses of plain water per day.(3)

Getting a cold, cough, bruises and cuts are unavoidable parts of childhood. Remember, it is not possible to completely remove germs or infections from their lives, but we can help strengthen their immune system through keeping some small but important things in mind. Providing our children with healthy food, habits and environment goes a long way in ensuring that these ailments are short and not frequent and make childhood the best experience for your precious kids. 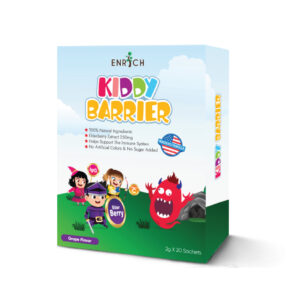